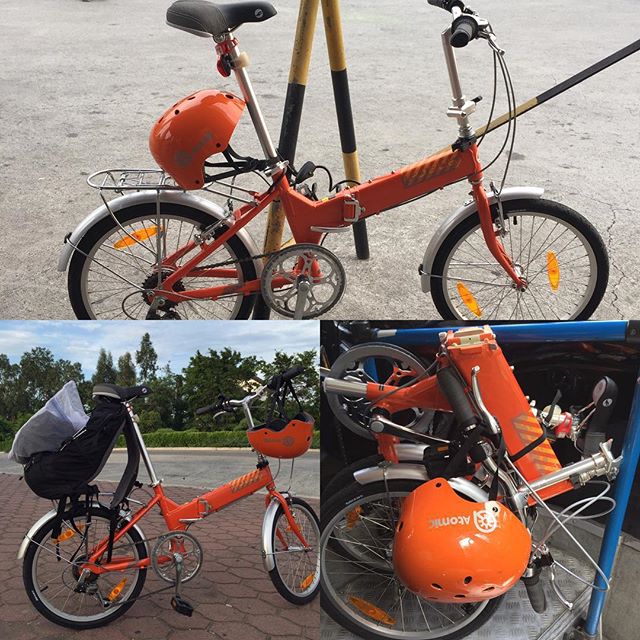 The Giant FD 806 is most affordable built bike offered by Giant in the Philippines.

I got the Giant FD 806 folding bike as an impulse buy.

I wanted a folding bike so I can go bi-modal for my Parañaque to Makati commute.

That means I’ll take the bike from the house to the bus stop.

I’ll take a bus to get from Parañaque to Makati.

Take the bike from the Makati bus stop to the office.

Then do the same thing going back.

I imagine saving PHP 70 for each bike commute to work day.

This will probably get me my investment back after 200 bike to work days which I imagine will take ten months.

After looking at all the bike shops in Pasong Tamo this bike was the best I could buy with my budget.

I used it for a month, bike commuting got tired and stopped.

I then tried bike commuting from Parañaque to Makati and back again but the process at the time felt like it was more trouble than it’s worth.

Don’t get me wrong, I love using this bike but if you intend to use this bike to commute for 15km a day straight I wouldn’t recommend it.

Update: The reason why I didn’t like this bike for work related bike commute is that it did take some time to get back and I wasn’t really good at planning what I was going to bring back then. I had some heavy art supplies, and CrossFit gear and was working in a call center so I also had three meals worth of packed lunch. My backpack then was heavier than what most people are willing to take on a bike ride and my bike commute times are crazy. I left the house half past midnight and needed to be in Makati by 2am. I then left Makati at noon or close to five pm so the the sun was extremelt hot and/or the traffic was horrible.

This bike can take some abuse. I took it to Makati but because it was rush hour, I couldn’t find a bus that would give me a ride mostly because it’s full of people and I ended up riding it all the way to Parañaque then I got invited by a bike group to join them as we rode back to the Fort, Makati and the final stop is in Manila then back to Parañaque.

I also took this bike from Parañaque to Makati then Mandaluyong to Marikina to Cainta.

The bike holds up in long range rides 30km a day or so better than I expected. It’s true that small wheels require you to pedal more and the ride is slower if you compare it to my mountain bike but the ride is comfortable enough that I don’t notice.

I still use it often for short trips. I bought myself a rear carrier bag and use that a lot. The advantage of a rear carry is you can bike without a backpack or a belt bag. This doesn’t restrict your breathing and everything feels lighter. The downside is that you have to remove it every time you’ll leave your bike. I tried removing the rear carrier and the mud guards this summer. It felt that the bike got lighter but not that much difference. The place I live in has anti flood walls so I’ll need to lift the bike a few times to get it inside the house and I don’t feel that much different carrying the bike without the mud guards and the rear carrier.

I’ve taken this bike from Parañaque to Sta. Rosa and the ride was super comfortable compared to using a mountain bike.

I now have a fixed gear and a mountain bike as an alternative but I use this bike for errands that require me to carry things like a heavy backpack.

One advantage of this bike is the posture you are in while riding it. The upright position makes riding while carrying bags are comfortable.

It’s not as fast but you get there in a chill, comfortable manner.

It’s also good for climbing because ot the small wheels.

I actually now prefer this bike for long rides that are not time sensitive.

This bike is really tough. I haven’t repaired or maintained this bike in any major way. I got a flat once. Had the inner tube vulcanized, and also replaced the brake pads. My chain is squeaky though. I’ve never cleaned it. I might take it to a shop for that or buy a new one if needed. This bike deserves way more love than I give it.

Should you buy it?

The bike is beautiful. I get a lot of compliments.

The price of the bike is close to double of most of the cheap folding bikes that weighs the same. I really couldn’t tell the difference.

My friend tells me that with Php 14,000 I could have gotten a Doppelgänger or paid a little bit more for a Dahon.

Written on May 3rd , 2016 by Kevin Olega
« Best Metro Manila Siopao Guide Tips on How to Secure Your Bike »